The best offers the Booking Hotels in Barcelona

Barcelona is the capital of Catalonia and is a beautiful city full of culture and places of interest. It is one of the most important cities in Spain and has a very special culture. In this city the Catalan language is widely used, however, you will have no problem communicating in Spanish.

If you find yourself visiting Barcelona you are unlikely to get bored, as there are hundreds of amazing places to visit. And many more things to do when you are visiting the city of Barcelona. You can visit this city at any time of the year, as in any of them, the city will show its splendor. However, the best times to do so are during the summer and during Christmas.

This coastal city is located in northeastern Spain and has more than 1.6 million inhabitants, making it the second most populated city in Spain. It has a vibrant economy and tourism is one of its major sources of income, as it is visited by millions of people from all over the world every year.

Undoubtedly, it is a city that you can not miss, as it is fascinating. One of the main attractions of the city is the large number of monuments and artistic buildings created by Antonio Gaudí. You can also visit one of the most emblematic places for soccer fans, the Camp Nou.

It can be said that this city has everything to become your next tourist destination. It is one of those cities that you end up falling in love with once you get to know it. So, consider Barcelona for your next vacation, because we assure you that you will not regret it.

In which area are the best hotels in Barcelona?

The best areas to find hotels are in the center of Barcelona or Las Ramblas.

What are the best hotels in Barcelona?

Which hotels in Barcelona have the best views?

In this category we can include the Hotel 1987 or the Hotel Sant Agustí, which is the oldest hotel in Barcelona.

What are the best hotels in Barcelona for families?

Among these are the Catalonia Portal de l’Angel or the Andante Hotel.

Which hotels in Barcelona are best to go with my partner?

If you are traveling with your partner, some fantastic hotels are the NH Collection Barcelona Gran Hotel Calderón or the Catalonia Plaza Catalunya.

What is the price of a hotel per night?

The price of a hotel per night can range from 75 euros to 250 euros.

Which hotels in Barcelona are closest to Camp Nou?

How much does a hotel in Barcelona cost for a weekend?

The cost of a weekend in Barcelona can range from 150 euros to 500 euros.

Which Barcelona hotels are closest to the museums?

Some of the best hotels near the museums are the Hostel One Ramblas or the Aparthotel Arai Superior.

What are the best neighborhoods in Barcelona?

Among the best neighborhoods in the city are Gracia, Ciutat Vella, Eixample and Poblenou.

What hotels are recommended near the airport?

If you are looking for a hotel near the airport, the best options are the Barcelona Airport Hotel and the Sleep&Fly.

What to visit in Barcelona 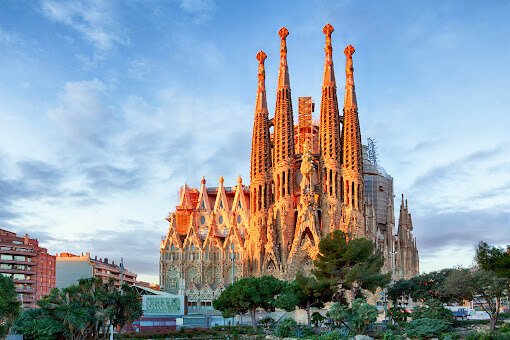 The Sagrada Familia is clearly one of the busiest tourist sites in Barcelona. It is a gigantic cathedral that was designed by Gaudí and which has been under construction for more than 135 years. And that the work is expected to be completed in its entirety for the year 2026.
This is one of the most visited religious monuments in Europe, so it is not so easy to buy tickets. You can opt for a guided tour, which includes a ticket and you don’t have to wait in line. Therefore, this is one of the best options to get to know this wonderful architectural work.

This is the oldest and most picturesque neighborhood in Barcelona, it dates back to Roman times and you can still find traces of that era. This neighborhood is part of the Ciutat Vella and is located south of the city. It is also the historical center of the city and a place worth visiting.
It is a place that is really beautiful and that will leave you enchanted when you are in Barcelona. There are many interesting places to see in this beautiful neighborhood, such as the Cathedral of Santa Creu i Santa Eulalia. 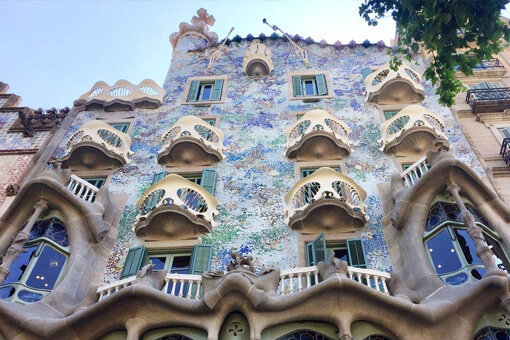 This is a really beautiful building that is listed as a world heritage site. This is probably the best work of Gaudi after the Sagrada Familia. Upon arrival, you will appreciate a beautiful facade inspired by the forms of nature. With shapes that became Gaudi’s personal signature.
The facade of this building is something wonderful, but it is not the only thing, because when you enter, you will find a magical and dreamy place. Undoubtedly, a place you should not miss if you are walking around Barcelona. 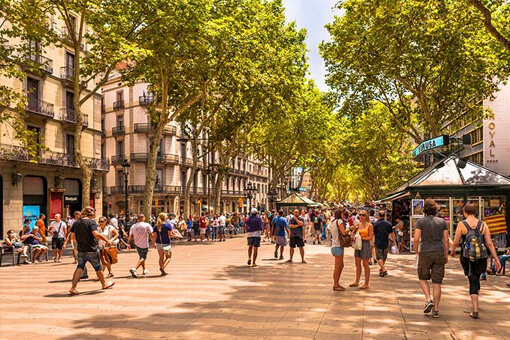 La Rambla is a beautiful and quiet avenue that connects Plaza Cataluña with the Columbus Monument. It has a length of 1.3 kilometers, it is not the longest, but it is undoubtedly one of the most important in the city. This is a place where you can find a lot of tourists who walk along it every day.
In this avenue you will be able to find a lot of street artists offering their artistic works. But you will also find several restaurants that may be of interest to you to taste the local cuisine. 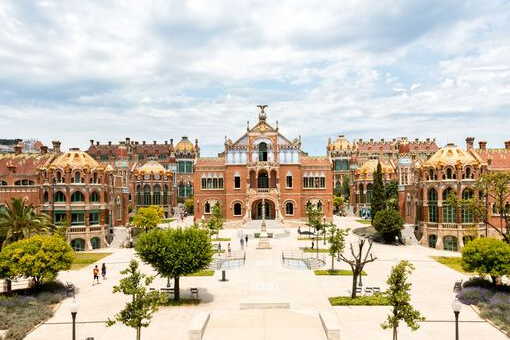 This is a wonderful structure which was created in the nineteenth century and is also listed as a world heritage site. It is a beautiful building that has a large central square where large numbers of people gather.
This place was founded in the year 1401 and remained as an assistance center until a few years ago. During its life it underwent several remodeling works that gave it a modernist look. However, in 2009 it ceased to function as a hospital because a new building was built. 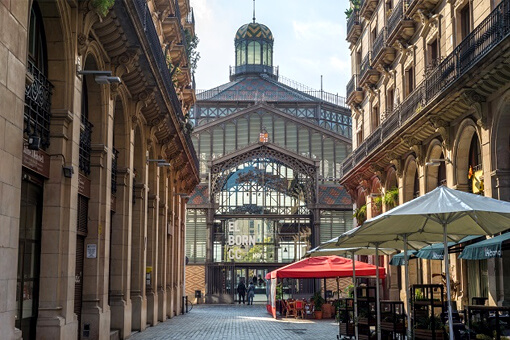 It is a really beautiful gothic neighborhood, this stands out because it is one of the most visited places today. This place began as a settlement in which jousting and celebrations were held in medieval times. However, today it is one of the most modern neighborhoods you can find in Barcelona.
You will find a lot of stores, restaurants, tapas bars, cafes and many other places that are really interesting. In addition, there are other places of interest such as the Basilica of Santa Maria del Mar, which is a beautiful architectural work. Undoubtedly, this is a place you cannot miss when you are in Barcelona. 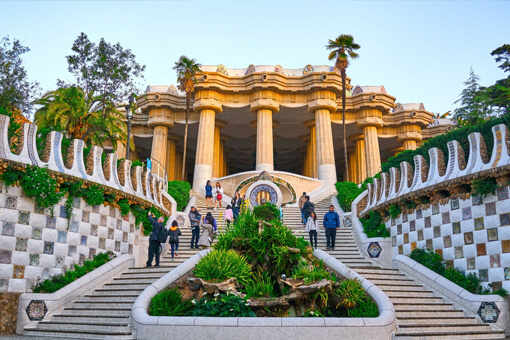 This is one of the most impressive parks in the whole country, it was designed by the renowned architect Antonio Gaudi who created a dream place in this place. The whole park could be considered as a wonderful work of art inspired by the forms of nature. This can be seen in all the details of the buildings in the park.
The park was inaugurated in 1926 and since then it has become one of the most important parks in the whole city. And every year it receives a large number of tourists from all over Spain and the world. 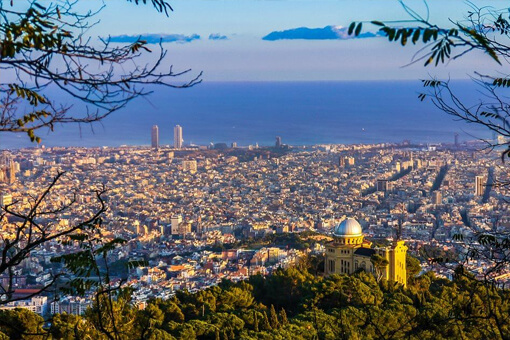 In the city you will find several viewpoints that will give you a beautiful panoramic view of the city. Some of them are natural, while others are man-made. Among the best viewpoints in the city you can find Montjuic, Bunkers del Carmel, Tibidabo or Park Güell itself.
Regardless of the viewpoint you want to visit, you will be able to get wonderful views of the entire city. And the city of Barcelona is simply beautiful, so you can not miss the opportunity to visit one of these viewpoints. Some are free, however, you may have to pay an entrance fee for some of them. 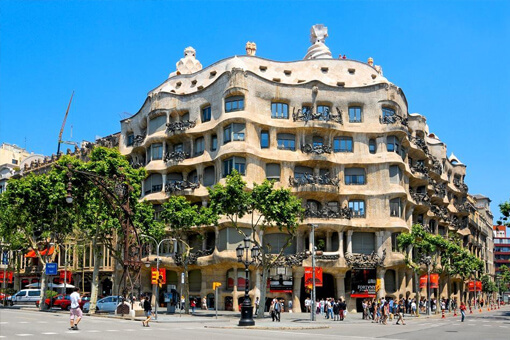 This is another wonderful works that Gaudí gave to the city of Barcelona. It was built in the 20th century and is colloquially known as La Pedrera. It has a really beautiful facade full of wavy arches that Gaudí liked so much.
About a million people a year visit this wonderful work of Gaudí every year. It is a cultural asset that has been open to the public since 1978 and is a highly visited point of the city.
Undoubtedly, this is a place that will be worth visiting thanks to the great historical legacy. In addition, all of Gaudí’s works have become part of the city’s cultural heritage.

What customers in Barcelona are saying

Cristina, Colombia.
“Barcelona is a wonderful city, I have visited it on several occasions and every time I arrive it surprises me with a new and wonderful place.”

Rubén, Argentina.
“One of my favorite cities in all of Europe, I have known many, but Barcelona catches you from the first step you take in it”.

This website uses cookies to improve your experience while you navigate through the website. Out of these, the cookies that are categorized as necessary are stored on your browser as they are essential for the working of basic functionalities of the website. We also use third-party cookies that help us analyze and understand how you use this website. These cookies will be stored in your browser only with your consent. You also have the option to opt-out of these cookies. But opting out of some of these cookies may affect your browsing experience.
SAVE & ACCEPT